When you think of the possibility humankind’s first contact with an extraterrestrial civilization, what image pops into your mind?

Its probably one of a number of movie-influenced images. Depending on your age, it might be of Richard Dreyfuss in Spielberg’s classic “Close Encounters of the Third Kind.” If you are a bit younger, it might be Will Smith in the 1996 movie “Independence Day”. If you are a Trekkie of any age (like my wife), your image is from the movie “Star Trek First Contact”, which was released later in 1996. In that movie, Zefram Cochrane (James Cromwell) assisted by First Officer William Riker (Johnathan Frakes) blast off in a home-built rocket ship to the beat of Steppanwolf’s classic song “Magic Carpet Ride”. Once on orbit they activate the first warp drive, attracting a passing Vulcan ship. 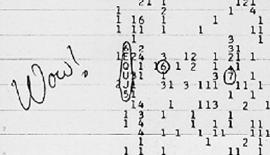 For many amateur astronomers and devotes of Carl Sagan, their image of first contact might be from the 1997 movie “Contact” based on Sagan’s book of the same title. In the movie, Jody Foster, in a wide brimmed hat atop her car is listening intently to the hiss on a set of earphones, eavesdropping on the VLA radio telescopes featured prominently behind her. She perks up as the hiss gradually changes and the loud heartbeat like sound of First Contact pounds in her ears. Since Sagan was in the SETI (Search for Extra-Terrestrial Intelligence) business, we would expect this portrayal be the most authentic.

While all of these images are compelling and make for good drama, the reality of first contact may have been much more mundane. Thirty-five years ago, on Aug 18, 1977, in Columbus Ohio, astronomer Jerry Ehman was reviewing computer printouts at his kitchen table. The data, from Ohio State University’s “Big Ear” radio telescope SETI survey, contained a signal that was so startling that when he saw it, Ehman circled it and wrote Wow! in the margin. A rather whimsical essay about the Wow! signal, aired on NPR (in recognition of 50 years of SETI) noted that this very famous signal was actually received at nearly midnight on August 15 1977, arriving just a few hours before Elvis Presley died http://www.npr.org/blogs/krulwich/2010/05/28/126510251/aliens-found-in-ohio-the-wow-signal .

The history of the Big Ear radio telescope, and the Wow! signal is truly fascinating (and can be found at the Big Ear Memorial Website http://www.bigear.org. Completed in 1963 after seven years of construction, the Big Ear consisted of a tiltable flat reflector 100 feet tall by 340 feet long which directed radio signals from space onto a parabolic reflector that measured 360 feet long by 70 feet high. The parabolic reflector focused the radio waves into two horn antennas 410 feet away, where the signal was fed into the receiver and monitoring computers. The reflectors were made up of steel beams and rods covered with a fine wire mesh which was very opaque to radio waves. The whole arrangement sat on a three acre ground plane made up of aluminum sheeting over concrete.

The Big Ear had the sensitivity and resolution of a dish radio telescope of about 157 feet in diameter. From 1963 to 1971, it was used to survey the radio sources in the sky from 63 degrees north declination to 34 degrees south declination. It recorded almost 20,000 radio sources, almost 60% of which were previously undiscovered.

The search for extraterrestrial intelligence began in earnest in 1959 with a paper by Phillip Morrison and Giuseppe Cocconi. In the paper, the authors suggested that the microwave band be searched for evidence of extraterrestrial civilizations, and developed a series of frequencies an targets to investigate.

In 1960, Cornell university astronomer Frank Drake carried out the first modern SETI investigation using the 26 meter Green Bank radio telescope. Drake organized the first SETI conference in 1961 that inaugurated SETI as a scientific endeavor. He developed his famous equation for determining the number of communicating civilizations in the Milky Way galaxy.

By the early 1970s, NASA began to support SETI investigations, and interest increased dramatically. The driver was a NASA-funded study called Project Cyclops, which included Drake. Project Cyclops was largely a paper study which proposed an array of 1,500 radio telescopes to search for extraterrestrials. Due to its estimated cost of $10 billion, the array was never built, but the project spawned many new SETI efforts, one of which was the conversion of the Big Ear.

The Big Ear radio telescope was well suited for use in SETI and was converted in 1973 for use in the search. For the first several years, the output from the receiver was recorded by multiple pen plotters. Eventually, using NASA grant money, upgrades to Big Ear included a new 50 channel receiver which was connected to the existing IBM 1130 computer, and new software (written by Jerry Ehman) designed to process the signals in a way that would enhance the telescope for SETI. Data was printed out on paper (a big improvement on the plotters previously used), and the print-outs were scanned regularly for interesting signals. It was just such a scan in which Jerry Ehman confronted what could be ET.

What makes the Wow! signal so interesting to SETI investigators is that it fits the profile of what they expect a signal from ET to be. Its frequency of approximately 1420 megahertz was in the “water hole” a quiet spot very near to that of the resonant frequency of neutral hydrogen and extending to the frequency of water. SETI researchers believe this frequency would be logical one for ET to broadcast on. The intensity and duration of the Wow! signal also matched exactly what an extraterrestrial point source would have looked like when received by Big Ear.

Obviously, confirmation of the signal is needed before it is clearly determined to be a broadcast by ET. The area of the sky in constellation of Sagittarius where the Wow! signal apparently originated was searched again by Big Ear for several months. Other researchers using other radio telescopes have also tried to reacquire the Wow!, all to no avail. While one attempt did spend about 14 hours listening for another signal, not enough telescope time has been spent looking to either prove or discredit the Wow! signal. Maybe the timing was unlucky or the signal had since been switched off. While still unconfirmed, the so-called Wow! signal has held up as one of the most likely signals from aliens in more than 50 years of active searching.

We humans seem to have a built-in bias toward believing in extraterrestrial intelligence. For as long as mankind has given thought to the nature of our universe, there have been those who have held the belief that there are a multitude of inhabited planets “out there”. Many ancient mythologies refer to other worlds in the cosmos containing non-human life forms.

As the study of the cosmos became more scientific, and the vastness of space was becoming understood, the search became more scientific. William Herschel, for example, noting the many “spiral nebulae” and thinking them to be new solar systems forming, hypothesized thousands of planets inhabited by human like beings. In fact he (and many others before and since) believed the moon to be populated with intelligent beings. Other historic figures of that period who championed a “plurality of worlds” many populated, included Immanuel Kant and Benjamin Franklin.

This belief has persisted to this day. The works of science fiction authors and movie makers have ever tapped into this belief of their audiences to make their stories believable and compelling. The late Ray Bradbury was well known for his belief that mankind’s destiny is to evolve to the stars. 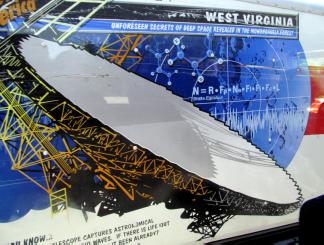 In my mind’s eye I can still see Carl Sagan on his epic series “Cosmos” in a turtleneck sweater expounding on the “billions and billions” of planets to be found in our universe. On each planet, there was an opportunity for life to take hold, and for many there is the chance of evolving intelligence. NASA has funded the Kepler space observatory designed for the discovery of “earth-like” planets, as well as funding studies in astrobiology.

This belief in a “plurality of worlds” and intelligent life in the universe, however, has not been universally accepted. At times and from different quarters, it has been challenged and undermined by well-reasoned criticism. One of the most famous criticisms is called the Fermi paradox.

In the 1950s, the argument against extraterrestrial intelligence was boiled down to a simple question supposedly uttered by physicist Enrico Fermi. “Where is everybody?” The size and age of the universe and the “billions and billions” of planets out there, and the (relatively) short time it took to evolve intelligence on earth, leads us to believe that there should be large numbers of advanced civilizations out there. Since we have not yet had first contact, it means that either our current searches are incomplete, we are looking for ET using the wrong methods, or intelligent civilizations capable and interested in interstellar communication really are very rare. Carl Sagan was know to refute this by saying that the “absence of evidence does not constitute evidence of absence.”

There is also evidence from outside of astronomy that would support the Fermi paradox. Most evolutionary biologists support this criticism. They believe that there is no mechanism that would push life to evolve into the more complex forms necessary for intelligence to emerge. They point to the many places in the fossil record where life actually became less complex to bolster their case. And as to extraterrestrial intelligence, they point to what they believe is extreme improbability that intelligence evolved on earth to support their belief that we may be alone – at least in our galaxy.

This “Rare Earth” hypothesis was put forth in 2000 by geologist and paleontologist Peter Ward and astronomer and astrobiologist Donald Brownlee in their book “Rare Earth: Why Complex Life is Uncommon in the Universe. Others have cited that cosmic events like gamma ray bursts are common and deadly enough to explain the Fermi paradox.

As much as the idea of contacting extraterrestrial civilizations really excites my imagination, I have to admit that I’m in the Rare Earth camp, though I believe that we should still keep on looking for ET and for several years ran the [email protected] program on several computers. Maybe if we all believed that intelligent life is rare in the universe we would start to act in a way to ensure we stick around and keep developing, so that if we finally do meet ET we might actually match up to them.

Was the Wow! signal really first contact? As much as we might like to believe it was, it is clear that the jury is still out. Even the experts in the field at the SETI Institute agree that the evidence is inconclusive on this and other signals they have found. And then again, maybe the Wow! signal was not a general broadcast signal, aimed to alert us to the existence of a new alien race. Maybe it was short targeted signal meant for a single purpose …. Elvis has left the building!

HAS has its own Discord Server! Contact [email protected] to join.