Founded in 1955, Houston Astronomical Society is an active community of enthusiastic amateur and professional astronomers with over 60 years of history in the Houston area. Through education and outreach, our programs promote science literacy and astronomy awareness. We meet via Zoom the first Friday of each month for the General Membership Meeting and the first Thursday of the month for the Novice Meeting. Membership has a variety of benefits, including access to a secure dark site west of Houston, a telescope loaner program, and much more. Joining is simple; you can sign up online, by mail or in person at a monthly meeting.

It may seem obvious, but critical focus is one of the key attributes of a good astro-image. Critical focus is the technical term used to mean that the image is focused to the diffraction limit of the optical system (based on the physical properties of the system and how light interacts with it).

Most of us take critical focus for granted in the images we see and take daily. Our DSLR’s with modern lenses, our point and shoot cameras and our smartphone cameras all come equipped with exquisitely accurate autofocus systems. This technology has been available at the consumer level for over 40 years, first in film cameras, later in digital cameras and has been continuously improved ever since.

Not so for astrophotography. Telescopes don’t come equipped with the type of focus sensors that the early film cameras had. Astro-imagers had several different manual focus aids they could use, such as flip mirrors and Focault knife-edge focusers, but these were tedious to use and required considerable experience using them to achieve critical focus.

First published in the March 2012 issue of The GuideStar

I truly enjoy learning the history of astronomy, because I find that it is much more interesting way to learn the basics than getting them out of a textbook.  It helps me to better understanding when I am able to visualize the path taken by the astronomer, as well as the struggles and small successes that lead to the discovery of new knowledge.

It is also encouraging for me to note that in the early days of astronomical science, it was “amateurs” who were making the discoveries and developing new techniques and technologies in the process. Few stories from the history of astronomy illustrate this better than the discovery of the aberration of starlight.

The development of our understanding of astronomy has been greatly enhanced by the application of the scientific method. Observations are made to test a theory, theories are modified to match observational evidence and at times unexpected results are obtained which lead to new discoveries.  A classic demonstration of the scientific method from astronomy’s early years is the discovery and description of the aberration of starlight by James Bradley, a very dedicated amateur, driven to understand what he was observing.

This is an update on my project to get kids involved in astronomy by giving them their own personal telescope.  I feel they will be more likely to use a telescope that is theirs, one they helped to design and decorate. This is my fourth project and I am very pleased with the outcome.

Valentino Dela Cruz is an active, curious and very smart four-year-old. He has been studying the solar system in school and is extremely interested in anything space oriented.

Why did Charlie chase comets???

Given the incredible and efficient technologies used to discover comets in the twenty-first century, both on Earth and in space, many of today’s telescopic observers pursue comets mostly as objects of passing interest—especially when they blaze forth to naked-eye splendor or threaten to hit the earth…or other planets.  Note, however that owing to the same leaps in technology, some amateur astronomers across the globe also conduct extremely serious studies of, and searches for comets, and have contributed greatly to the science. Nevertheless, to the mid-eighteenth-century observer, comets were among the most mystifying sights in the sky.  The astonishing appearance of six-tailed C/1743 XI (Cheseaux’s comet of 1744) – one of the greatest since the dawn of modern astronomy – may have inspired Messier’s lifelong passion for comets.

Have you spotted any “night lights”? These phenomena brighten dark skies with celestial light ranging from mild to dazzling: the subtle light pyramid of the zodiacal light, the eerie twilight glow of noctilucent clouds, and most famous of all, the wildly unpredictable and mesmerizing aurora.

This month’s asterism is called the “Broken Engagement Ring”. It is located near the bowl of the Big Dipper. It is made up of a semi-circle of stars, about 15 minutes in size. 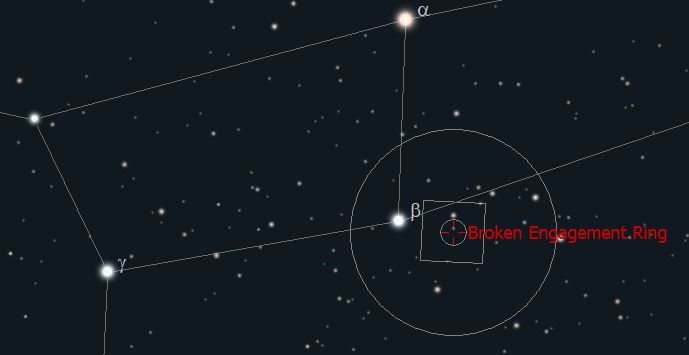 This asterism is just off Beta β Ursa Major, Merak, a 2.4 magnitude star. The bigger circle in the picture is a typical finder view. 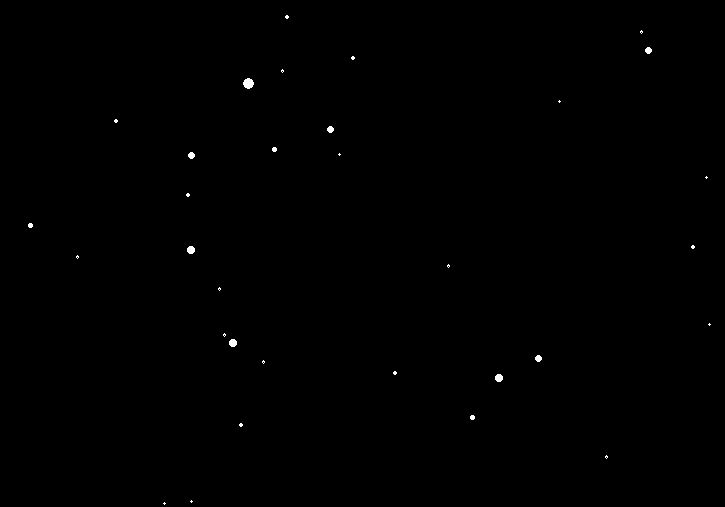