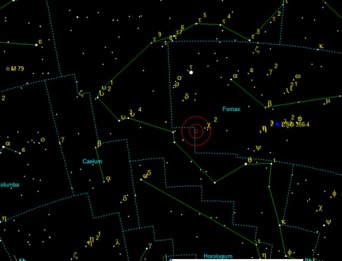 NGC 1365 is a barred spiral galaxy in the Fornax galaxy cluster, 56 million light-years from Earth.  It was first noted by Australian astronomer James Dunlop (the Southern Hemisphere’s version of Charles Messier) in his 1827 catalog.  It is one of the brightest and largest members of the Fornax cluster.  In my recent investigation of the Fornax cluster for the AL Galaxy Groups program, I observed 1365 last, and found that I had inadvertently left the best for last.  My log is as follows:

Wonderful view; bright round nucleus, with a fainter central bar going roughly NW-SE, a spiral arm coming off the SE end curling back to the north, with a foreground star right in between the arm and nucleus.  The arm coming off the NW end is fainter but also easily seen; both arms are brighter than the bar.  Lovely galaxy.

I was so impressed by my view of 1365 on that night that I even bothered to make a sketch of it, which is something I don’t usually enjoy doing.  The primary reason I made the sketch was to verify when I got home that I was really seeing the details I was seeing.  It was quite thrilling to find, upon looking up photos of the galaxy, that my visual impression was spot-on. 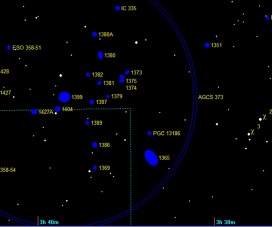 located within the borders of Fornax, it is most easily located from the figure of Eridanus.  It is found just to the west of a triangle of unlabeled 5th-magnitude stars just “downstream” from Upsilon4 Eridani.  See the chart below for further reference.

While you’re in the area, you might as well investigate the rest of the Fornax cluster, as it is actually the next-richest nearby cluster of galaxies in the sky after the great Virgo cluster.  While no galaxy in the cluster is quite as ssively detailed as NGC 1365, several of the other galaxies are at least fairly bright and shouldn’t be too difficult in a moderately-sized scope.  A chart highlighting the brightest members of the cluster including 1365 is below.

The HAS VSIG would love to hear about your own visual observations of NGC 1365.  Send them to the VSIG list server.  To get on the VSIG email list server, contact me at [email protected].