During April, Ursa Major will be high in the sky over Polaris.  There are many cataloged galaxies in Ursa Major's boundaries, giving us lots of targets to hunt down and observe.  As a visual challenge, the pair NGC-3893/3896 is of interest.  William Herschel discovered both galaxies in the spring of 1788. The primary, more extensive of the pair, is NGC 3893.  It is a face-on spiral galaxy about 55 million light-years away and is 93,000 light-years across. It has a visual magnitude of 10.7, making it readily visible in small aperature scopes.  NGC 3893 is 4.4 arcmin in diameter, for reference that would be half the length of M82.  This gives you insight as to how it will appear in your eyepiece; consider observing M82 first to get a perspective with the eyepiece you plan to use. You will find this galaxy pair by moving south along a line from Phecda to one degree north of Chi Ursa Major, the first star in the rear legs of the great bear.  There are two predominant spiral arms with uneven brightness due to high surface brightness and numerous areas of emission nebulosity.  Look closely to detect that it is a barred spiral. The other of the pair, NGC 3896, is much smaller and dimmer and will take effort to observe.  NGC 3896 is only 3.3 arcmins separated from the more massive NGC 3893.  Some studies suggest what we see as NGC 3896 is the remint of a galaxy that had previously passed through NGC 3896.  Professionals with access to large telescopes have detected a faint trail interaction between the two.

Let us hope for an excellent dark sky soon, and please put this galaxy pair high on your observing list. 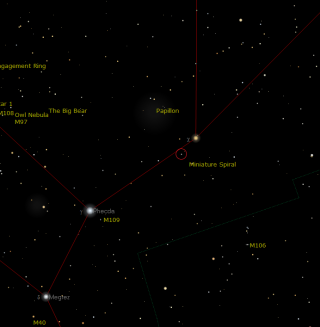