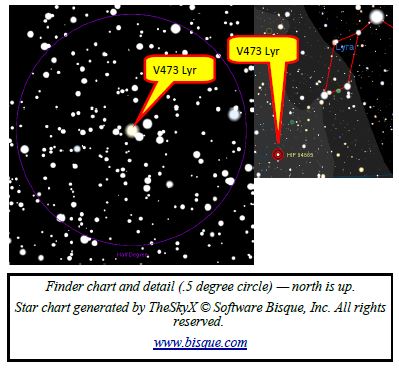 Many HAS members will be attending the Silent Sky play at the Main Street Theater this month. The play is about Henrietta Swan Leavitt who identified the luminosity (intrinsic brightness) / period relationship in Cepheid variable stars. The prototype star is Delta Cep, which was the object of the month way back in September, 2006.

Eta Aql, another Cepheid is the object of the month in the June, 2015 GuideStar. Generally speaking, Cepheid stars are short period, low amplitude variables. Their light doesn’t change much, and the cycle of variability is short. V473 Lyr’s period is only about 1.5 days. The period and the amplitude of variation is, itself, variable so any results you obtain through your own observations may, well, vary.

The AAVSO has limited data on this star, and you can print a finder chart by visiting AAVSO.org. If you print a chart, make sure the orientation of the stars in the chart match the orientation of stars you’d see in your eyepiece. Join the AAVSO and submit your observations at AAVSO.org.

So, how did Miss Leavitt discover this relationship? She was tasked with getting data from photographic plates of the Large Magellanic Cloud. The stars in the cloud are approximately the same distance from us so the brightness of these stars could be compared. In her report she wrote, “It is worthy of notice (that) the brighter variables have longer periods” (From the book Miss Leavitt’s Stars.) Needless to say this was a great understatement of her discovery, but she was a cautious person and only had a limited number of examples of variable stars to work with.

By the time Edwin Hubble discovered a Cepheid variable in the Andromeda Galaxy the ‘calibration’ was not very good. This resulted in his estimate of distance to the Andromeda Galaxy of 1,000,000 light years. As astronomers established better information on the Cepheid variables, the distance estimate changed to the better value of 2.1 million light years.