This article is distributed by NASA Night Sky Network

If you live in the Northern Hemisphere and look up during June evenings, you’ll see the brilliant star Vega shining overhead. Did you know that Vega is one of the most studied stars in our skies? As one of the brightest summer stars, Vega has fascinated astronomers for thousands of years.

Vega is the brightest star in the small Greek constellation of Lyra, the harp. It’s also one of the three points of the large “Summer Triangle” asterism, making Vega one of the easiest stars to find for novice stargazers. Ancient humans from 14,000 years ago likely knew Vega for another reason: it was the Earth’s northern pole star! Compare Vega’s current position with that of the current north star, Polaris, and you can see how much the direction of Earth’s axis changes over thousands of years. This slow movement of axial rotation is called precession, and in 12,000 years Vega will return to the northern pole star position.Bright Vega has been observed closely since the beginning of modern astronomy and even helped to set the standard for the current magnitude scale used to categorize the brightness of stars. Polaris and Vega have something else in common, besides being once and future pole stars: their brightness varies over time, making them variable stars. Variable stars’ light can change for many different reasons. Dust, smaller stars, or even planets may block the light we see from the star. Or the star itself might be unstable with active sunspots, expansions, or eruptions changing its brightness. Most stars are so far away that we only record the change in light, and can’t see their surface.

NASA’s TESS satellite has ultra-sensitive light sensors primed to look for the tiny dimming of starlight caused by transits of extrasolar planets.Their sensitivity also allowed TESS to observe much smaller pulsations in a certain type of variable star’s light than previously observed. These observations of Delta Scuti variable stars will help astronomers model their complex interiors and make sense of their distinct, seemingly chaotic, pulsations. This is a major contribution towards the field of astroseismology: the study of stellar interiors via observations of how sound waves “sing” as they travel through stars. The findings may help settle the debate over what kind of variable star Vega is. Find more details on this research, including a sonification demo that lets you “hear” the heartbeat of one of these stars, at: bit.ly/DeltaScutiTESS

Interested in learning more about variable stars? Want to observe their changing brightness? Check out the website for the American Association of Variable Star Observers (AAVSO) at aavso.org. You can also find the latest news about Vega and other fascinating stars at nasa.gov. 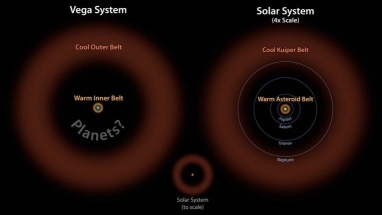 Vega possesses two debris fields, similar to our own solar system’s asteroid and Kuiper belts. Astronomers continue to hunt for planets orbiting Vega, but as of May 2020 none have been confirmed. More info: bit.ly/VegaSystem  Credit: NASA/JPL-Caltech 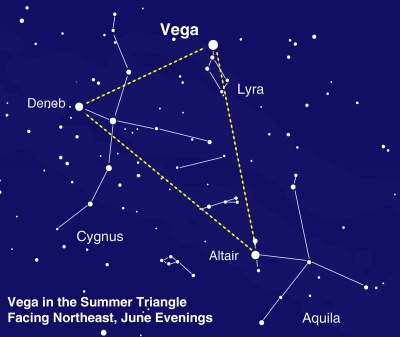 Can you spot Vega? You may need to look straight up to find it, especially if observing after midnight.