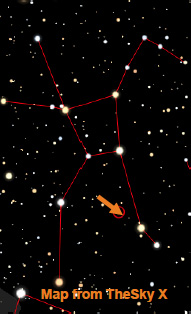 This summer I had the opportunity to see this object through the 107” telescope at the McDonald Observatory. It was very nice, of course, but this object isn’t that dim. It will be relatively easy to see in amateur telescopes.

It is well placed for early evening viewing by the 22nd of October when the moon is out of the early evening sky. On that date, sunset is at 18:48 (6:48 p.m.) DST (yes, we’re on Daylight Savings Time until November). You’ll want to catch it early in your observing session that night because it sets at 11:08 p.m.

While it will look round to you, Hubble Space Telescope images show it to be a hodge-podge of material in a messy configuration surrounding the remnant of what was once a low mass (similar to the sun) star.

In the lifecycle of the universe stars are born and they die. They run out of fuel and can no longer sustain nuclear fusion. If the star has a low mass, it dies with a whimper rather than a scream. Its outer layers have been ejected as it nears the end of life and they’re glowing because of the radiation from the remnant white dwarf star. A white dwarf star isn’t fusing anything, so calling it a ‘star’ is incorrect.

Most importantly, stars are manufacturing facilities for chemical elements heavier than hydrogen or helium. Without these processes, the carbon and the oxygen (which combines with hydrogen to make water) that are parts of all of us would not exist. Our bodies are 65% oxygen and 18% carbon. We owe our existence to the stars that have come before us. Perhaps each planetary nebula you see now is the source of the elements required to make a new civilization on a not-yet-established planet.