Shallow Sky Object of the Month: M1 - The Crab Nebula 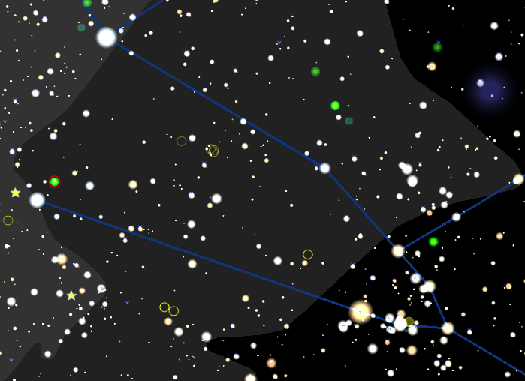 M1, the first object In Charles Messier’s list of objects (added in 1758) is the remnant of a star that went supernova in the year 1054. Based on what we now know about the nebula, it is believed that the supernova may have been as bright as –7 magnitude, much brighter than Venus at its brightest (-5 mag). While the Messier list includes many objects of many kinds, M1 is the only supernova remnant in the list. So, while you may see other nebulous (cloud-like) objects when you observe the Messier list, all the others represent star forming regions — areas in which new stars are being born.

M1 represents a star that has ended its life by exploding into the beautiful remnant that we now see. Objects in the sky acquire names that describe how they looked to early observers. So it is with the Crab Nebula — the Earl of Rosse applied the name ‘Crab’ as a result of his observation with a large telescope in 1848. 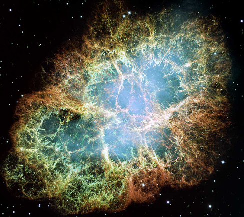 If we turn the clock back on this object, to before it went supernova, we discover that the progenitor was about a 10 solar mass star (as massive as 10 Suns) and stars more than 8 solar masses are considered high mass. Where did all that mass go? Some of it is in the nebulous area and some of it is in the neutron star that is the final remains of the original star. These two do not account for all of the original mass, however and it is thought that some of the original mass was carried from the star by the solar wind. Astronomers don’t know where the missing mass is.

Until astronomers figured out the physics for this neutron star pulsar some thought that the radiation was a signal from another intelligent civilization.

So, what’s a neutron star? When a supernova goes off the driving force is the gravitational collapse of the star. The neutrons are as compressed as physics will allow (the old physics notion that two objects can’t occupy the same space applies).

The neutron star is less than two solar masses. Why didn’t the supernova create a black hole? The answer is that the progenitor star wasn’t massive enough to do that. The creation of a black hole requires that a very high mass star reach the end-of-life.