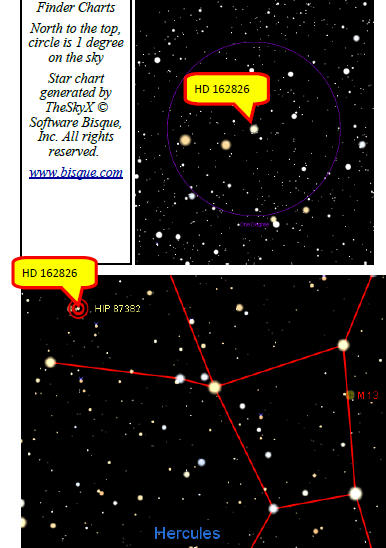 We all know that stars are ‘born’ in clusters. The evidence of that is easy to find. The Pleiades is a cluster of relatively young stars which have yet to completely shed their cocoon of dust and gas. The Orion Nebula is an example of stars in an earlier stage of development, still enshrouded with the dust and gas that is forming the stars.

It should be no surprise, after all, that our sun was born with other stars and that a bit of looking around and analysis of nearby stars would allow us to identify the Sun’s siblings. Astronomers at the University of Texas McDonald Observatory, led by Ivan Ramirez, have done just that, and this summer announced that HD162826 is one of those sibling stars.

How do they know? For one, the star has a similar chemical composition to our sun, and while it is comprised mostly of hydrogen and helium, it also has some elements in common with the Sun… barium and yttrium. Relatively young stars like our Sun have formed in a universe in which earlier stars have cast off some of these heavy elements. The concentration of these heavy elements in the interstellar medium is not uniform, however, so clouds of similar elements form stars with similar elements. The cluster in which this star and our sun formed is likely to be an open cluster. Globular clusters are older and tend to keep their shape as a globular because of the mutual gravity among the stars.

That’s not all. HD162826 is a fellow traveler with the Sun, moving through the space around the Milky Way Galaxy. Work continues at the observatory to find other sibling stars.

This should be an easy object to see in binoculars or a small telescope, shining at Mag 5. You’ll find it high in the sky after dark, with a transit time of about 7:00 p.m. and a setting time of 3:20 a.m. Your atlas may identify this star by other catalog names including SAO47009 or HIP87382.