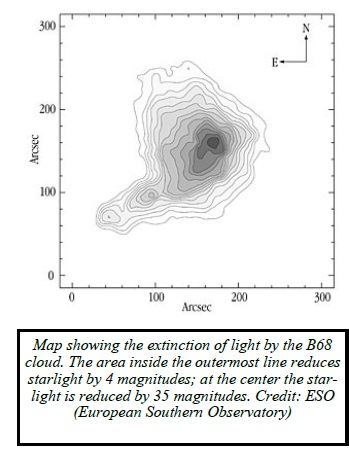 This object will require dark skies (no moon), and will benefit from large aperture. Transits about 10:30 p.m. on July 26, prime night at the HAS observing site.

Stars form when a collapsing cloud of hydrogen, helium, and dust finally heats up enough to begin nuclear fusion. There are numerous nebulae in which you can find young stars that have recently ‘turned on’. The object this month is one that represents an even earlier stage in star formation. You’ll be looking at a cloud of gas and dust that is starting its collapse but that has not yet formed any stars.

How can we see this? In this case, the cloud is in a star-rich part of the Milky way, so we get a good look at the cloud because it obscures the stars behind it.

The nebula is kidney shaped, and obviously not spherical (yet). It’s not spherical because there hasn’t been enough time for the material that will make the new star(s) to collapse enough to become spherical. These things start with irregularly shaped collections of dust and gas and only become spherical over time. 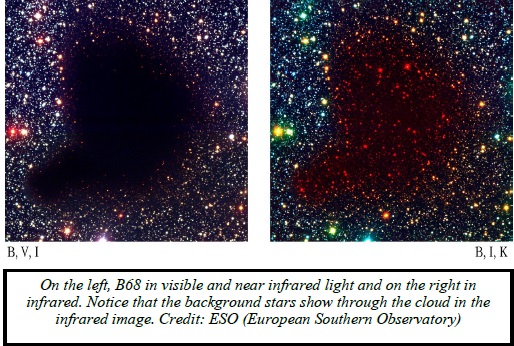 If you look at an image of B68 in infrared light, you’ll see the stars behind the cloud shining through the cloud, but significantly reddened. This is because the material disperses the blue light from those stars in the same way that stuff in our atmosphere disperses the blue light from the Sun (explaining why the sky is blue). You can get a sense of the density of the cloud as well, and it should be no surprise that the densest part of the object is near the center.