Shallow Sky Object of the Month

The Methuselah Star – Oldest Star in the Milky Way

be one of the more fascinating stars in the sky. The very early universe had much smaller quantities of the heavy chemical elements in it. Why? Because the heavy elements are created (fused, actually) in stars and in the early universe there had not been enough time for stars to form, live their lives, and seed the universe with these heavier elements. By ‘heavier’, I mean those elements in the periodic table beyond hydrogen and helium. This star has .4% of the quantity of heavy elements as our Sun (a 5 billion year old star).

So, any stars that are still around that formed in the early universe would be expected to have low quantities of these heavier elements. In fact, astronomers use the chemical contents of stars as a clue to the age of the star. 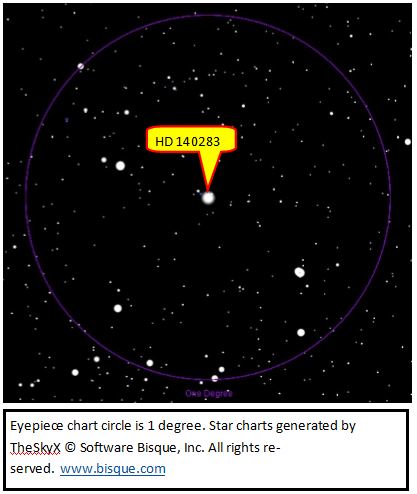 . This low-metallicity star had to have begun shining in a very early era of the universe. Astronomers call this type of star a ‘Population II’ star (stars that formed much later are called ‘Population I’ stars… go figure). If you really want to investigate the earliest stars in the universe, these would be called Population III stars. For these stars there are no heavy elements at all; they’re all hydrogen and helium. No Population III stars have been identified.

It is relatively bright to earth-based observers because it is relatively close to us (as these things go) at 187 light-years. Astronomers now know that the age of the universe is 13.8 (latest estimate) billion years old. Interestingly, the age of this star is estimated at 14.46 +/- .8 billion years, so the low end of the range is 13.66 billion years. While there’s some uncertainty in the age, clearly the star can’t be older than the universe. What we can say for sure is that this was an early forming star.

This star also has a very high proper motion. Proper motion is its real motion across our sky and this star is moving at .13 milliarcseconds per hour, about 11.4 arcseconds in a year. This amount of motion could easily be detected astrometrically by amateurs. It would be fun to image the star field today, and do the same again and see the proper motion of the star.

This is a low-mass star with only about 85% of the mass of our SunNot until the ‘helium flash’ event at the end of the red giant phase does helium begin burning. Remember that the lower the mass of a star the longer it lives, and this one is an example of such a low mass star. It’s not a main-sequence star any more, and it’s not yet a red giant star, but it’s on the path leading from the main-sequence to the red-giant phase. Even though the star has moved off the main sequence, it’s still burning (fusing) hydrogen to helium. The age of the star is inferred from its position on the HR (Hertzsprung-Russell) diagram employing standard stellar evolution models.

For HAS observers, you’ll want to catch this one early in the evening in September. By mid-month it sets at about 22:45. It’ll be an easy observation, though, and one you can catch just after you get your telescope set up or your binoculars out of the bag.