Shallow Sky Object of the Month

Originally Published in the August, 2011 Guidestar

You’ve probably seen this object many times, but I want you to see it again, and this time with different eyes. You’ll see it differently because you will understand its place in the cosmic scheme of things. When low mass stars, like our Sun, have fused its hydrogen to helium and have fused the helium to carbon and oxygen the star is done for. There’s not enough mass to ignite the carbon and oxygen, so the nuclear fusion stages of the star are over. In the process of getting to this point the star has thrown off some of its outer layers. This material, that used to comprise the outer layers of the star is what we’re seeing as the nebula (ring in this case). This material is being ionized by ultraviolet radiation from the central star.

With a large telescope you may be able to see the central star, called a ’white dwarf’, but to call it a star is really inaccurate. A star generates its energy from nuclear fusion, but there is no fusion going on here. What is left is too small to ignite the carbon and oxygen. What you’re seeing as the central star is the residual heat from fusion that ended not that long ago (in astronomical time). The carbon / oxygen core was, as you might imagine very hot from being inside the star and it is this residual heat that is causing the central ‘star’ to continue to glow.

When you see a planetary nebula, you are looking at a very short phase in the lifetime of a star, perhaps 50,000 years or so. This is a long time to us, but compared to the billions of years of stellar time (the Sun, for example is expected to burn on the main sequence for 10 billion years), the interval in which a planetary nebula exists is very short. About .0005% of the lifetime of the star. Eventually, the left-over heat in the central star dissipates, the planetary nebula goes out, and we’re left with an invisible black dwarf (not a black hole). This object is conveniently placed between the two southern stars of the constellation Lyra (the Lyre) and is well placed for viewing during the summer months. In mid-August, it transits at about 10:30 p.m., and with the Sun setting at about 8:00 p.m. it will be dark enough for you to see it. Look fast, though, in 50,000 years or so there won’t be anything to see at this location on the sky. 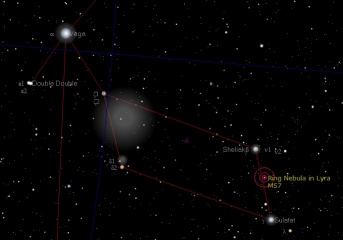