Re-thinking an Alien World: The Strange Case of 55 Cancri e 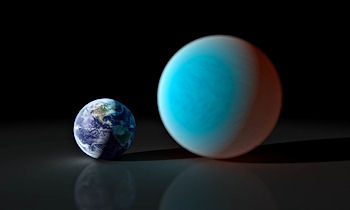 Forty light years from Earth, a rocky world named “55 Cancri e” circles perilously close to a stellar inferno. Completing one orbit in only 18 hours, the alien planet is 26 times closer to its parent star than Mercury is to the Sun. If Earth were in the same position, the soil beneath our feet would heat up to about 3200 F. Researchers have long thought that 55 Cancri e must be a wasteland of parched rock.

Now they’re thinking again. New observations by NASA's Spitzer Space Telescope suggest that 55 Cancri e may be wetter and weirder than anyone imagined.

Spitzer recently measured the extraordinarily small amount of light 55 Cancri e blocks when it crosses in front of its star. These transits occur every 18 hours, giving researchers repeated opportunities to gather the data they need to estimate the width, volume and density of the planet.

According to the new observations, 55 Cancri e has a mass 7.8 times and a radius just over twice that of Earth. Those properties place 55 Cancri e in the “super-Earth” class of exoplanets, a few dozen of which have been found. Only a handful of known super-Earths, however, cross the face of their stars as viewed from our vantage point in the cosmos, so 55 Cancri e is better understood than most.

When 55 Cancri e was discovered in 2004, initial estimates of its size and mass were consistent with a dense planet of solid rock. Spitzer data suggest otherwise: About a fifth of the planet’s mass must be made of light elements and compounds — including water. Given the intense heat and high pressure these materials likely experience, researchers think the compounds likely exist in a “supercritical” fluid state.

A supercritical fluid is a high-pressure, high-temperature state of matter best described as a liquid-like gas, and a marvelous solvent. Water becomes supercritical in some steam turbines — and it tends to dissolve the tips of the turbine blades. Supercritical carbon dioxide is used to remove caffeine from coffee beans, and sometimes to dry-clean clothes. Liquid-fueled rocket propellant is also supercritical when it emerges from the tail of a spaceship.

On 55 Cancri e, this stuff may be literally oozing — or is it steaming? — out of the rocks.

With supercritical solvents rising from the planet’s surface, a star of terrifying proportions filling much of the daytime sky, and whole years rushing past in a matter of hours, 55 Cancri e teaches a valuable lesson: Just because a planet is similar in size to Earth does not mean the planet is like Earth.

It’s something to re-think about.

Get a kid thinking about extrasolar planets by pointing him or her to “Lucy’s Planet Hunt,” a story in rhyme about a girl who wanted nothing more than to look for Earth-like planets when she grew up. Go to http://spaceplace.nasa.gov/story-lucy.

The original research reported in this story has been accepted for publication in Astronomy and Astrophysics. The lead author is Brice-Olivier Demory, a post-doctoral associate in Professor Sara Seager’s group at MIT.