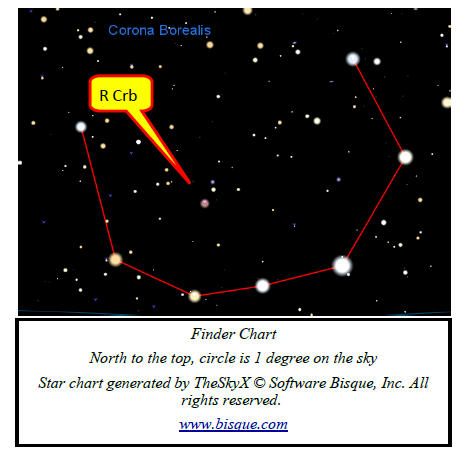 Stars can be variable for several reasons. They can be an eclipsing binary, where one star eclipses the other from time to time, or they can be intrinsic variable stars, in which some characteristic of the star itself changes over time. Most often these variability phases in stars occur late in the star’s life when the star is unstable, perhaps throwing off its outer layers on the way to becoming a planetary nebula.

R Crb is variable because a layer of carbon dust forms either at, or at 20 radii away from the star (depending on which model of the stellar evolution of RCrb stars you like). This dust is like a cloud going overhead and it obscures and scatters the visible light from the star. After some time, the star is believed to burn off the dust and return to full brightness. R Crb, and other similar stars, are hydrogen deficient, with a lot of carbon and nitrogen, which would indicate that they are late life stars.

This dimming cycle of R Crb is quite long.

There are short term, low amplitude, regular fluctuations in the star’s brightness. It’s not certain how this characteristic of the star may be related to the long-term variability, but it may be during these pulsations that the carbon soot is sloughed off the star and which later comes to obscure the star.