Original article appears in GuideStar May, 2014. 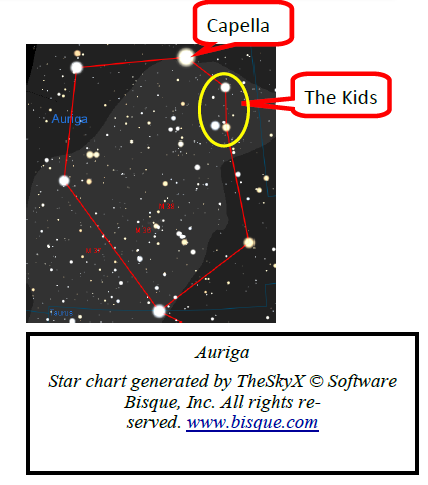 Auriga, the charioteer, is usually depicted as carrying a goat in his left arm. The goat is represented by the star Capella (from the Latin ’capra’ which means ’goat’). Three nearby stars represent ’the kids’.

While the overall color of the star is G, the same as our Sun, what you see is, in fact, the combined light from two stars that make up the star system. Under normal circumstances the two stars would be called ’A’ and ’B’ (and some sources refer to the two stars this way).

Not this pair, because the fact that this is a double star was not discovered early on and another nearby star was given the ’B’ designation.

What to do? To solve this problem, astronomers named the close double stars ’Aa’ and ’Ab’. Don’t try to split these with your telescope though. You can’t do it because they’re only a fraction of an arc-second apart (some references say .2 arc-seconds separates the two stars). It took the interferometer at the Mount Wilson Observatory to identify Capella as a double-star (in 1919).

The stars are close enough to each other that the distance between them is measured in millions of miles rather than light-years. Different sources of information provide different distances between the stars.

There is also some disagreement about the status of these stars. James Kaler in his book The Hundred Greatest Stars says that the brighter star has completed its hydrogen burning phase and is now burning helium (to carbon). Kaler goes on to say that the secondary star is still burning hydrogen.

The EarthSky web site says that the two stars are now entering the Red Giant phase.

What we can say for sure, based on the estimated mass of each of these stars is that in the long term both of these stars will become white dwarf stars. Why? Because these are each considered low mass stars. Only stars having 8 solar masses or more end their lives as a supernova.

There may or may not be visible planetary nebulae associated with these stars (and it would be interesting to see what a double-star planetary would look like).