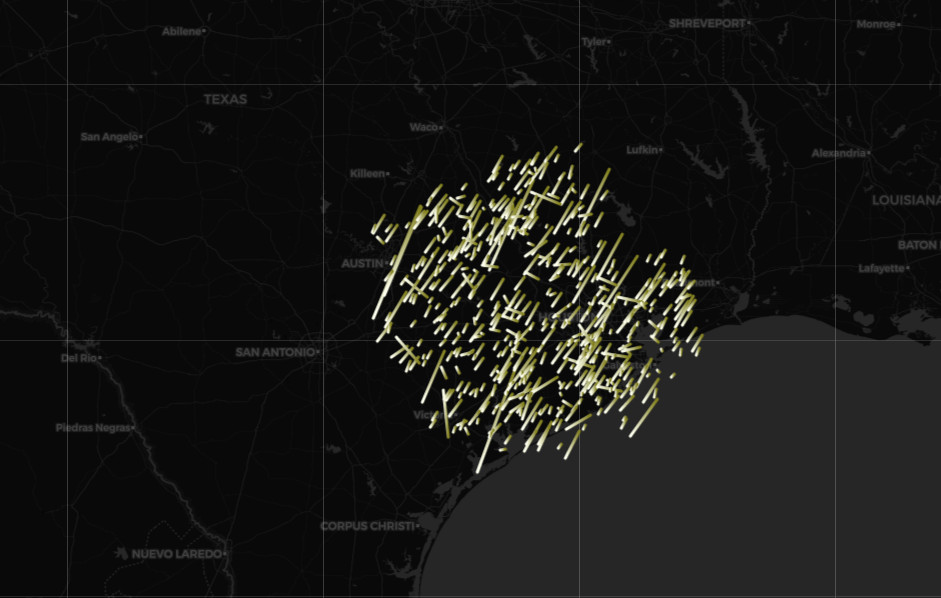 Walt Cooney was not expecting much excitement on Saturday morning, August 14. The Perseid meteor shower was winding down from its peak at mid-afternoon on August 12 and the Texas CAMS network had already recorded more than 400 and 500 meteors on the previous  two nights. He noticed that the computer controlling his camera station had accumulated a surprising number of meteor files overnight. Before long, he received an email from Peter Jenniskens, director of the CAMS project at NASA Ames Research Center in California, who told him that the Texas and California networks had captured a rare Perseid outburst (see figure), perhaps from the return of a dense filament of the meteoroid stream that killed the Olympus-1 telecommunications satellite in 1993. In all, the Texas network recorded 647 meteors overnight. Walt says the success was “way cool”. Indeed, it was a major accomplishment for the Texas network, which did not exist one year ago. The story made the Spaceweather.com web site (https://spaceweatherarchive.com/2021/08/18/perseid-meteor-outburst-2/). Many human observers missed the outburst because it was well after the traditional peak, so the success demonstrated the importance of routine electronic observations and validated the contributions of amateurs who run the network. 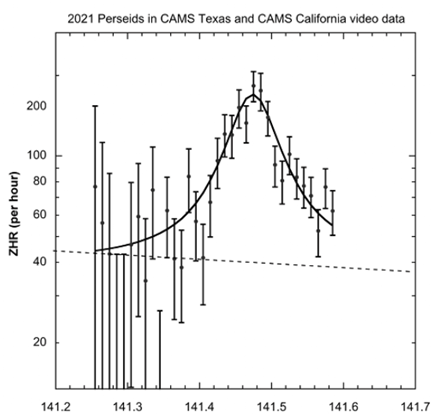 This graph, which appeared on Spaceweather.com, shows the zenithal hourly rate (ZHR) curve derived from Texas and California CAMS stations. The ZHR is a normalized hourly rate that expresses the number of meteors that would be seen by a perfect observer with the radiant at the zenith in perfect conditions. Solar longitude is the position of the Sun along the ecliptic. One degree of solar longitude is approximately 1 day, so the graph shows a period of about half a day on August 14. According to the International Meteor Organization, the expected ZHR for the Perseid shower was about 110, but the CAMS-derived rate peaked at over 200, an unusually intense Perseid flare up.

What is CAMS? And how did Walt and other club members end up running a Texas network? CAMS stands for Cameras for Allsky Meteor Surveillance and is a project run by NASA-SETI and led by Dr. Peter Jenniskens (http://cams.seti.org/). It is a global network of automated video cameras that watch the night sky for meteors with the goal of better defining the catalog of visual meteor showers and calculating the orbits of the particles that cause these showers. Walt got interested some years ago, but he thought the set up was probably too complicated and time consuming. After retirement, he decided to give it a try and he built stations in his backyard in Katy and at the dark site in Columbus. They began monitoring in September of 2020. He talked up the project and soon other club members added their own stations. Don Selle added one at Canyon Lake, Fred Cyrway, in Magnolia, and Joel and Becky Brewer in Sealy. These stations constitute the current Texas network and Walt says others club members are thinking of adding to it. The Texas network is one of about 15-20 such networks around the globe.

Having a network of camera stations is important because multiple views of the same meteor allow its geometry to be calculated. Meteors streak through the upper atmosphere at altitudes of 80-120 km (50-75 mi). Meteoroids are typically sand size or smaller grains shed by a comet that run into the upper atmosphere. Because they are traveling at high speed, usually several tens of kilometers per second, meteoroids cause an ionization trail that glows, typically for only a fraction of a second. With two cameras, separated by a baseline of tens of kilometers but pointed at the same spot in the upper atmosphere, the altitude and direction of the meteor ionization trail can be triangulated. From this geometry, the meteor radiant can be determined, showing whether the meteor belongs to a shower and which one. Moreover, the meteor orbit can be determined, allowing NASA to plot the meteor stream through the solar system. In the rare instances of a bolide, possibly indicating a large meteoroid fall, triangulation can pinpoint where fragments might have landed.

A CAMS station is basically a box of wide angle video cameras pointing at the sky (see figure). Walt’s Katy station contains 8 video cameras, each pointed to a different part of the sky. Each camera is a low tech analog video camera and is paired with a 6 or 8 mm f1.0 lens, with camera and lens together costing about $50. These lenses give the camera a field of view of about 26 x 34 degrees or 34 x 45 degrees. Video feeds are collected into a computer with a frame grabber, which records a video clip when a meteor is sighted. A photosensor turns the system on at dark and off at dawn, so the cameras run all night and record automatically. Data are downloaded from the computer to the CAMS project in California, where meteors are automatically processed by computer software. Although the Katy station has 8 cameras to cover most of the sky, any number will do. Fred Cyrway’s set up has four, Joel and Becky Brewer’s has eight, and Don Selle’s has two (see figure). CAMS networks are adding thousands of meteor observations to the growing database of meteor stream data, outstripping the production of visual observers. This productivity occurs for several reasons. Network cameras are always on, so if the sky is clear and a meteor occurs, the cameras should pick it up. The cameras are even able to record meteors even with a bright Moon in the sky. Visual observers get tired and have jobs, so data are often lacking for minor showers or non-shower nights. The cameras are also sensitive enough to pick up meteors as faint as magnitude 5 or 6, which is difficult for a visual observer who may have difficulty clearly seeing such faint streaks. Moreover, video records allow determination of meteor geometry, which is difficult to do visually. The Texas CAMS network has just begun operation and it has already made a major contribution to meteor science. The future looks bright and HAS members are again making important contributions to science.

If your interest was piqued by this article, consider attending the HAS meeting on September 10, 2021, when Dr. Peter Jenniskens, CAMS project leader at NASA Ames Research Center, will be our speaker. He will tell us more about CAMS and meteor research. 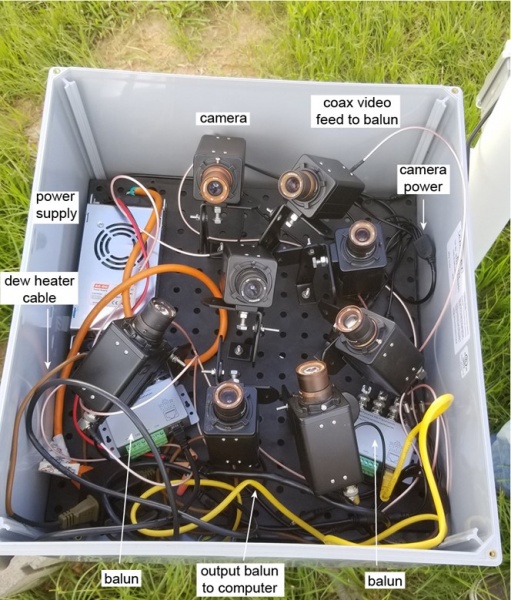 Inside the Katy CAMS station. The box contains 8 cameras, a power supply, two baluns to collect video feeds and send them to the computer,

and a dew heater. This box is covered by transparent plastic to protect the gear.