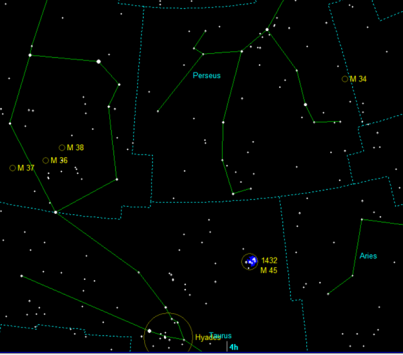 As we move further into 2021, with this column, we are fast approaching the 1/3 mark of observing the Messier Catalogue.  As COVID hangs on, I feel compelled to introduce more objects each month as enforced solitude continues to raise its ugly head.  Those of you who are more motivated or experienced in observing can go to the HAS website, click on “Programs”, and then click on the “Messier Challenge”.  A seasonally-oriented program will pop up enabling one to observe the Messier Catalogue as each seasonal group becomes easier to find.  The advantage to this system is one can obtain the best views, finish the catalogue in one year, and have the time to observe the objects rather than simply check it off a list.  Please note while some of the data may appear dated, the time of the year and the location data is still very usable.  It is my intention to update that program shortly.

Utilizing the Messier Challenge on the HAS website would be a quicker, systematic way to qualify for a Messier Astronomical League (AL) Messier Observing Award.  One must, however, become familiar with the AL requirements and reporting specifications.  Simply go to the AL website…https://www.astroleague.org/observing.html… go to observing programs, search on Messier, and study the outline of the program desired…AL has more than one Messier Award program available.

Starting this month, ~six Messier objects will be presented.  Each of them will be at their most observable during the current month as published.  Sky Tools has a rating scale giving some idea of how difficult an object is to observe.  I will be including this scale in each brief description below along with a numerical rating (1 to 8, with 8 being the most difficult) since some of the difficulty descriptions may be a little fuzzy in one’s mind if one is not familiar with their system.

Cast your eyes on the constellation Perseus and you are quickly attracted to the large misty patches of the double clusters NGC 869 and NGC 884.  In binoculars, they resolve into a grand pair of bright stellar splotches a half degree apart. While one might wonder why these were overlooked by brother Messier, perhaps they were simply too obviously not a comet.  He did, however, discover another open cluster, now called M34, glimmering nearby.

M34 is a loose conglomeration of stars about 225 million years old.  It has several hundred members, about 60 of which are visible in backyard telescopes, that are spread across a scant 11 light years of space.  Shining at magnitude 5.2, M34 is obviously visible to the naked eye under a dark sky.   M34’s stars include about a dozen brighter than 9th magnitude.

Messier notes: (Observed August 25, 1764) “Cluster of faint stars between the head of Medusa in Perseus, and the left foot of Andromeda…”

M36 is one of three bright Messier clusters decorating a rich band of the Auriga Milky Way, the others being M37 and M38 (following).  The cluster is young and metal-poor (there is that reference again…now, maybe you know what it indicates), with an age of about 40 million years.  M36 and its closest neighbor, M38 appear as hazy stars.  A moderately young cluster, M36 has a true diameter of about 12 light-years, with perhaps 60 telescopic stars visible in the field.

Messier notes: (Observed September 2, 1764) Star cluster in Auriga. With a simple three and a half foot refractor, it is difficult to distinguish the stars.  The cluster does not contain any nebulosity.

M37 is the second of the Auriga clusters introduced above.  With binoculars, one should be able to spot M37’s magnitude 5.6 glow with relative ease, to the point that, after the cluster is identified, it should be easy to see with the naked eye.  It is a small cluster, so its light is compact.  Telescopically, after looking at M36 and M38, M37’s grandeur is somewhat of a surprise.  M37 is a very rich open cluster with an age of about 540 million years.  The cluster may contain as many as 2,000 members.  About 500 of these stars are brighter than 15th magnitude and they spread across ~20 light years of space.  Close observations have revealed 545 single and binary members, 24 variables (including nine Scuti-type pulsating stars, seven eclipsing binaries, and one peculiar variable star).

Messier notes: (Observed September 2, 1764) Cluster of faint stars, close to M36.  The stars are fainter, closer together, and are enveloped in nebulosity.

About 2 degrees northwest of M36 and faintly visible to the naked eye is the third Messier open cluster in Auriga, M38.  At 20 light years in diameter, M38 is a massive star cluster, one third larger than M36 in apparent size, it is nearly a full magnitude fainter, independent of size.  Surprisingly, M38 also has twice the number of stars that M36 has.  M38 is an intermediate-age galactic cluster, ~375 million years, and contains about 300 stars in an area equal to half the diameter of the full Moon.  The density of its loosely-packed center is about eight stars per cubic parsec (something else to look up) – half the density of M36’s core and only one-fifth that of M37’s.

Messier notes: (Observed September 25, 1764) Cluster of faint stars in Auriga, close to M36 and M37.  Rectangular in shape and contains no nebulosity.

One of the greatest paradoxes in visual astronomy is that Galileo (who paid great attention to Orion) apparently never noticed the Great Nebula – though in 1617 he did record three stars in the Trapezium.  Oddly, there appears to be no mention of the nebula in medieval records.  Yet here is one of the greatest naked-eye nebulae in the heavens, dangling from one of the best-know asterisms, in one of the most famous and brilliant constellations. 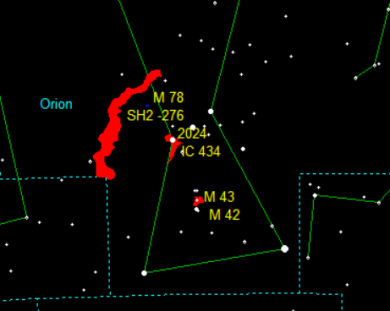 Huygens added a fourth star to the Trapezium in 1684 and independently discovered the nebula.  His description of the nebula should interest modern-day observers: “There is one phenomenon among the fixed stars worthy of mention, which as far as I know, has hitherto been unnoticed by no one and indeed, cannot be observed except with large telescopes.”  (emphasis added)

It begs the questions: Did some as yet unidentified event recently occur that caused the fluorescent gases to glow even brighter?  Why was the fourth star only “recently” observed?   One would think being a star nursery could be the reason.

Messier notes: (Observed March 4, 1769) Position of the faint star that is surrounded by nebulosity and that lies below the nebula in the sword of Orion.

NGC note: Remarkable, very bright, very large, round with a tail, much brighter in the middle, contains a star of magnitude 8 or 9.

Like many globulars, M79 is an integrated spectral type of F5 and contains an average metallicity.  I encourage you to look up “star metallicity” to discover its importance.  Each of its stars, on average has about 1/40th the amount of metal per unit of hydrogen as the Sun.  Aside from its fair distance from the Sun, M79 also lies a significant distance from the Galactic center in the halo, ~61,000 light-years distant.  One of its significant features is a tidal tail that points in the direction of the Galactic center.  To my old, tired eyes, M79 looks remarkably like an amoeba or a tadpole.

Recent observations of a large group of blue stragglers in its vicinity, lead to the conclusion the cluster system has already undergone a core collapse.

Messier notes: (Observed October 17th, 1780) Nebula without a star close to the ribbon of Pisces. 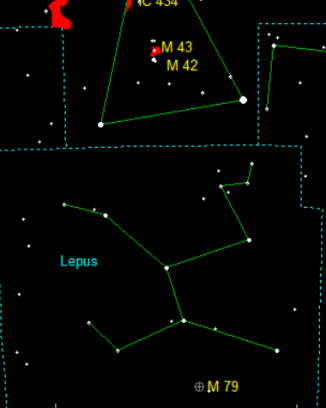