The HAS Dark Site: The Most Popular Member Benefit 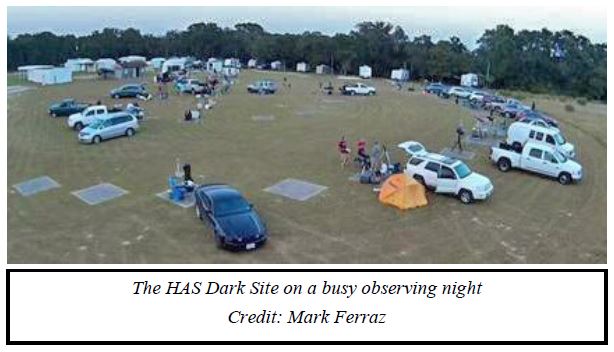 Steve and I attended the picnic on Saturday, October 3rd.  There was quite a turnout.  It was good to see so many new people out there.  As we walked out onto the field after dinner, it hit me that finally, after more than 30 years; the dark site is being fully utilized. There were people set up on the concrete pads.  Seven of the loner scopes were being used. The three telescopes in the main observatory building were being used to show our members some interesting objects, even Pluto.  Members were in their private observatories.  The private pads were in use.  Members were tent camping. The bunkhouse was full and almost all the RV spots were being used.  This has been the vision for the dark site since conception.  It was a real pleasure to see that the dream has become a reality.

Some of the newer members might not have too much insight into how all this came about.  Back in the late 1970s and early 1980s, this site became the dream of the HAS.  The short story - the property was acquired and the building began.  The observatory, with its three telescopes was for use by all trained members.  A process for reserving a scope was set in place.  The original concrete pads were for all members on a first come first served basis. When the second set of pads was built, two of them were made larger than the others.  These two large pads are for 18” or larger scopes or for handicapped members.  The bunkhouse was a donation by one of our members.  It is also first come first served.  Just put your pillow or bunk roll on a bed to hold it.  It is really nice to be able to get a little sleep in a bed,   after a long night of observing. That’s one reason that there are RVs out there.  Some of us, me included, just can’t handle tent camping or trying to sleep in the car.  We’ve done both.  I was really happy when our name finally made it to the top of the waiting list and an RV spot opened up.

After we started having picnics at the site, it was easy to see that we needed some tables and benches. Those were built by our members.  Grills were also installed under a cover.  This really makes it easy to hold picnics out there.

During Bob Rogers’ reign as Observatory Chairman, there was discussion at some of the Board meetings about the site not being used.  They wanted to find a way to make our members use it more often. It became evident that members would use the site more if they didn’t have to set up and take down every time.  Private observatories were the answer.  The provision for members to build their own private observatory at the site was part of the original design of the site.  The Dallas club had done this for years. Bob commissioned a couple of Observatory Committee members to look into this and come up with a proposal. Soon plots were laid out and members began building.  Now, there are members out at the site as much during the week as on weekends.

All of this didn’t just happen.  It took a lot of dedicated people and a lot of hard work to accomplish.  I just thought that a reminder of how fortunate we are to have this special place was in order.

Amelia is an Astronomical League (AL) master observer, the author of the AL Universe Sampler Program, the winner of the Texas Star Party 1991 Omega Centauri award and the 1999 Lone Star Gazer award.