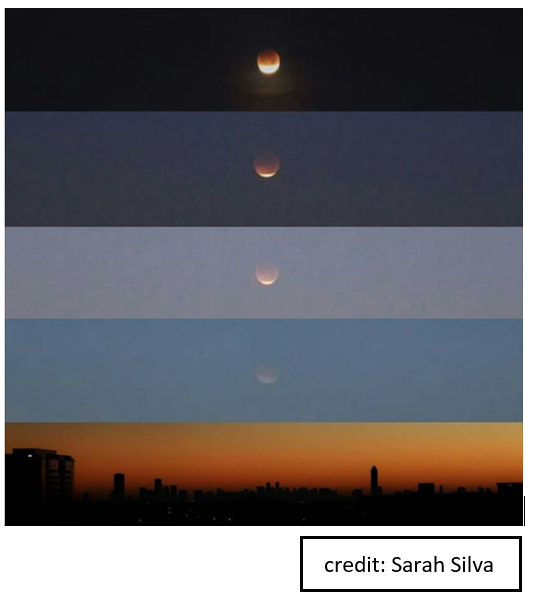 Well, this one was a way different experience from the Solar last August.

Woke up about 0600, and with the help of my wife, who is NOT an enthusiastic amateur astronomer; but, who never-the-less is tacitly supportive of my efforts, convinced our 16 year old Shih Tzu, Weasel, that, no, he really did not want to go with me where ever I was headed.

I hopped into the car and did a quick reconnaissance for the best observation point westward.  I settled quickly on east side of our front lake.  The view was completely unobstructed of a huge, full Moon and the western horizon.  The Moon was clear and bright…higher magnitude stars were quite visible…Saturn and Mars were sitting comfortably over my left shoulder. The Moon was beautifully reflected in the quiet waters.

The @%$#%^ streetlights were on display.  At least they are low-sodium and shielded and not nearly as bad as a full Moon.

I grabbed my 15x70’s and hit the trail to my second favorite park bench. On the way, I startled a Great Blue Heron from it’s sleep, who returned the favor in spades as I walked by.  For those who are unfamiliar with Great Blues, they are a big as a middle-sized dog and twice as noisy when aroused….ten times on a quiet morning.  And worse, the trail at that point is only three feet from the water.  We were quite close to one another, literally hand-shaking distance, when it let me know I was not welcome.

I checked my pants, then planted myself more-or-less comfortably on the slightly damp bench at 0640. I observed the full, “Blue Moon” just starting to enter the eclipse phase…a slight shadow was at the top of the orb.  That observation put me rapidly to work on the geometry of the shadow going from top to bottom.  Fortunately, having finally understood the west-to-east solar shadow last August, this was a piece of cake.

As the eclipse progressed, I was taken by the way the intensity of the shadow gradually increased.  With the solar eclipse…bam…it was dark as the Moon passed in front of the Sun.  With the lunar, yes, the bright, intense portion of the reflection dropped off sharply.  However, a more gradual shadowing followed, making it more of a ghostly apparition.  Lower magnitude stars began to show up, briefly, as the Sunrise was shortly to be intruding on the darkness.

I was somewhat surprised by the way “totality” took on a slightly different definition in my mind with the Lunar.  As the bright reflection completely passed on about 0650, a naked-eye full moon was still faintly visible in the following darkening shadow. However, it was disappearing rapidly.  By 0700, I was using the 15x70’s; by 0710, the image was lost to the binoc’s. The Moon was still about one degree above the horizon when I totally lost the visual.

As I meandered back to the car, warily watching for other attack-birds, I was treated to the beginnings of yet another magnificent Texas Sunrise.  It was being welcomed by hoards of noisy wild ducks eating breakfast.

All in all, a very satisfactory experience.

Thanks are due to all those who enthusiastically encouraged the rest of us lazy-bones to roll out and enjoy yet another treat from our magnificent cosmos.