The Moons of Saturn

This month for the challenge object we’re really going to change things up and go for something closer to home than the deep sky challenges we’ve been putting up there.  Anyone in this group really get into looking for the moons of the planets?  I know we all probably love the four bright moons of Jupiter and have observed them plenty, but before I rejoined the club several years ago I hadn't ever put much thought into the others.  Saturn has a lovely set of moons, and while none of them are as bright as Jupiter's big four, a great many of them are brighter than any of the OTHER moons of Jupiter.  Titan and Rhea are visible in pretty small telescopes, and an 8-inch should also easily pull in Dione, Tethys and Iapetus.  What struck me to mention this today is that recently at the Dark Site with my 16", I accomplished my first certain observation of Enceladus, and my first even suspected observation of Mimas.  That brings me to 7 moons of Saturn observed.  Quite a nifty observation.

If you're interested in Saturn's moons, the most important thing to be sure you've seen them and which ones you've seen, is to review an accurate chart of the moons' current locations (which change daily, or even hourly for the inner moons).  My preferred method is to use Stellarium, find Saturn and zoom in extremely close, to get the moons' positions.  You can do this prior to observing Saturn, and look for the moons at the positions Stellarium says they should be, or, as I prefer, you can observe Saturn first, writing down the time and making a crude sketch of where the various points of light you see are relative to Saturn, and then looking up in Stellarium later to find out which dot is which moon, or if any of them are just stars that found their way into the field.

Here is my crude sketch of the field of Saturn with suspected moons from the other night: 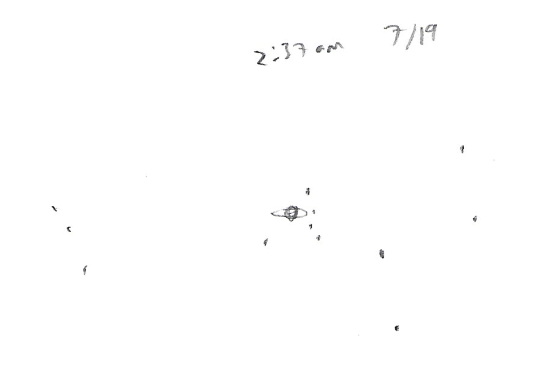 Here is the view from Stellarium at the same time.  This allowed me to confirm Iapetus, Titan, Dione, Tethys, and Rhea.

I had to zoom in further in Stellarium to confirm my observation of Enceladus, and to determine that Mimas was in fact located where I thought I saw something, increasing the probability that I did actually see Mimas.

So, now I was able to label the sketch: 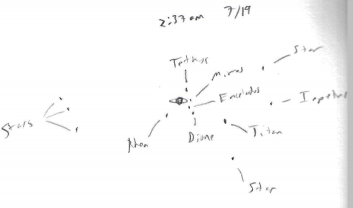 If this sort of observation appeals to you, go out and give it a try.  You don’t need to wait for a new moon for this one, as the moonlight doesn’t really hurt Saturn, and Saturn’s own glare is a bigger problem for the innermost moons anyway.  The HAS VSIG would love to hear about your own visual observations of Saturn’s moons.  Send a report to the VSIG list server or show up to a VSIG Zoom meeting to share with the group.  For more information about VSIG and to get on the VSIG email list server, contact me at [email protected].