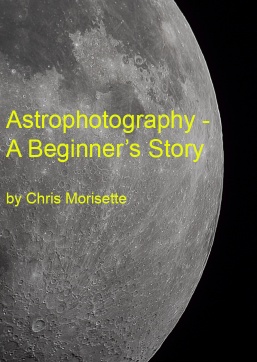 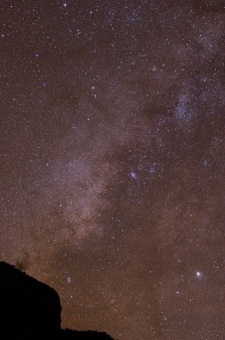 Last October my son and I went on a hiking trip to Big Bend National Park.  Having heard about the Park’s dark skies we figured some night photography would be fun.  In preparation I took an on-line class, bought a “fast” lens and tripod, then took some practice shots of the stars from the driveway.

We hit Lost Mine Trail our first night at the Park, head lamps on, looking for a suitable spot to set up.  After finding a good location, and after several camera adjustments, I snapped a shot and was stunned with the results… a beautiful image of the stars on a background of cosmic dust.  At that moment the hook was set. Astrophotography was going to be my new thing!

Once back home I started researching the topic.  A couple of conclusions soon followed.  First… finding objects of interest requires a basic understanding of astronomy.  Second… better to try before buying equipment.

Joining HAS seemed like a logical first step.  With plenty of knowledgeable people and a loaner telescope program a novice like myself could get a fast start.  After attending the Loaner Scope Training meeting and borrowing a scope from the program I was ready to give astrophotography a try. 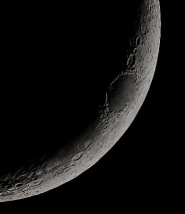 Starting with the borrowed 6” Dobsonian telescope and my Nikon D5100 DSLR camera, I added the following items to the kit:

While buying the T-Ring and Barlow I learned that a single photo could be created from a video.  This seemed like an ideal approach given the telescope mount I was working with.  Taking a 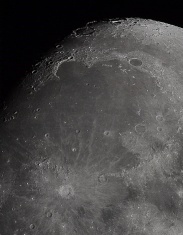 single photo is possible, but a video would increase the likelihood of capturing clear, crisp images.  Also, a video would allow for “stacking” individual frames, which would further enhance image quality.

Once a good sky forecast was in the offing the afternoon was spent collimating the telescope.  It took a while, but the mirrors were finally aligned.  After sunset I went out to the driveway, looked up, and saw a lovely crescent moon.  In short order I set up the mount and telescope, Barlow, and camera.  The Moon was sighted-in with the Telrad.  The camera was turned on in Live View mode and the Moon centered on the screen.  The camera was focused (using the telescope) and the video started.

After about 30 seconds the video was stopped and the results viewed.  And like at Big Bend I was floored with the results.  The Moon, slowly traveling through the Live View screen, came in and out of perfect focus.  It was amazing.  Two more videos were taken. Then the kit was packed up for the evening.

The task now was to convert the videos into photographs.  To do this I used the software packages “Planetary Image Pre-Processing (PIPP)” and “Autostakkert (AS)”.  A general explanation of how I used the software is provided below, however much more detail is available on-line.

The first step is to take the MOV file from the camera and run it through PIPP to create an AVI file.  The AVI is then opened in AS.  Here an anchor point is set and a quality analysis is run.  AS displays a plot of frame quality vs the total number of frames in the video.  From this plot a determination can be made of the percentage (or number) of frames to use in creating the image.  Selected frames are then aligned and stacked, resulting in a draft photo. 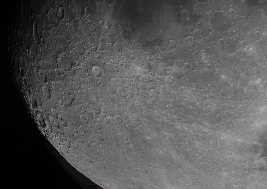 Further processing of the draft can be done in Adobe Lightroom.  Here cropping, orientation changes, and exposure adjustments are made.

In subsequent shoots I figured out how to use PIPP to create an AVI file using only a portion of the MOV file.  This was handy because AS works better with smaller input files, plus frames with issues (e.g. camera shake) could be eliminated.  Additionally, long videos could be taken and parsed in order to create two or more photos, a cool way to perform a real “Lunar Survey”. Overall the results were nice!

So with all these images… how can we tell what crater or sea we are looking at?  How can we begin to learn the geography of the Moon? Luckily an app called “Moon Globe” goes a long way towards filling in the blanks. 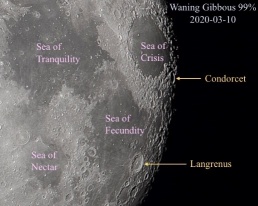 Moon Globe provides an annotated map of the Moon, for any date and time, along with shadow detail.  Now features on a photo can be compared to and matched with those on the map.   Like putting a puzzle together, an image can be flipped and rotated until large, obvious landmarks jibe with those on the Moon Globe map.  Once aligned smaller craters, mountain ranges, etc. can be identified. 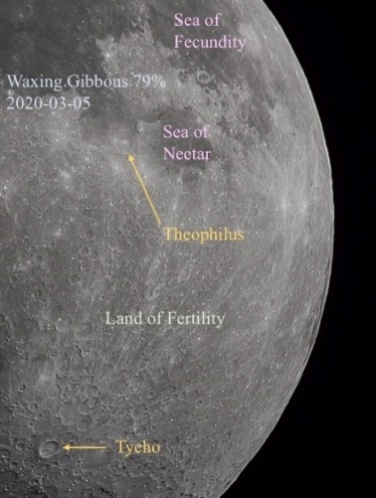 You can also label a photo with Power Point .

This is a perfect way to journal a night out under the stars or for sharing on Instagram.  Posting the original image, along with a labelled companion, is a great way to help your followers understand the Lunar surface too.

initially thought the pursuit of astrophotography, versus straight observational astronomy, was kind of an either-or proposition.  Instead, I’m finding astrophotography an excellent complement.  Having the ability to study and compare an image to established references is a great way to learn about any celestial object.

Next on the astrophotography project list are the Orion Nebula and Jupiter.  Not sure I can pull it off with the current kit, but I’ll sure give it try.

Special thanks to Allen Wilkerson for the Loaner Scope training and his stewardship of the Loaner Scope Program.  And to Dustin Enfinger for introducing me to PIPP and AS, and for all his follow-up help.