"A" is for Asterism

Original article appears in GuideStar May, 2017. 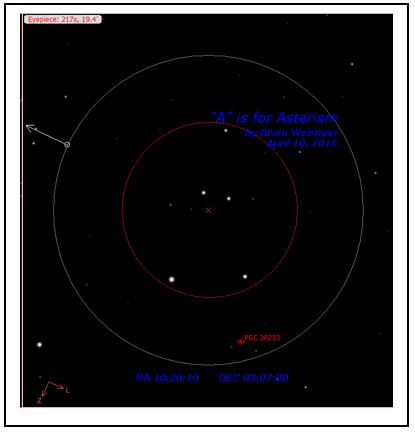 It was April 10, 2016, a bit past 1:30 a.m. I was star-hoping to a Galaxy cluster, NGC3156 and friends. Star-hoping is not to be confused with star-hopping. The later is a visual stroll that begins on an easy target and proceeds to nearby waypoints leading up to the desired object. The former is desperate meandering around a region of the sky, hoping to stumble across the intended target after a failed attempt at star-hopping.

Technical note:
There are three popular search patterns for star-hoping…

Anywho, there I was cruising the sky in my spastic search pattern when I saw something cool.  Five stars, neatly arranged in a kind of an inverted V, well more like an A to be precise.  There were other stars in the field, but these five were close enough in magnitude to strike me as a set, though they actually vary significantly in distance to earth.  The first thing that came into my mind was “Eiffel Tower”.  More on that later.  I wanted to know what this object was, so I checked the coordinates on my Synscan controller.  Even though I was star hopping, earlier I did do a Go-To star alignment to ensure good tracking and to bail me out of trouble.  ;-).  So my Synscan coordinates should have been good.  I also put a “skymark” into SkyTools for me to research at home.  I was able to see the Asterism perfectly rendered in SkyTools.

So with Eiffel Tower eliminated, what else could it be?  How will I determine this?  Google searching by RA and DEC didn’t seem fruitful, because there are multiple stars so the search would have to be range based.  Ugh.  Hold-up!  I can search by constellation!  This asterism is Sextans.  It’s also very close to Leo, so I searched for Asterisms in both.

DeepSkyPedia lists just one Asterism in Sextans.  The coordinates are different, and I cannot say what it is supposed to look like, having looked at that location in SkyTools.
http://www.deepskypedia.com/wiki/List:Asterisms_in_Sextans
DSP lists 19 Asterisms in Leo, and again the coordinates are not even close.
http://www.deepskypedia.com/wiki/List:Asterisms_in_Leo

I also checked the AL Asterisms program, and indeed it’s not there, yet.  The AL list closest asterisms are Sailboat and Rinnan’s Run.  The AL program coordinator assures me “A” will be included in the next update.

By now, if you’re still reading, you may be chomping at the bit for some stats on this Asterism:
R.A. 10:20:10  DEC 03:07:00
The stars range in brightness from mag.  9.3 to 11.0, so you’ll need about 4.5” aperture to pull in all the stars.  And the distances range from 24 ly to 720 ly.  The group fits in a circle 11 arcminutes across, so it’s about ⅓ the size of the moon.  It’s an easy star hop to, so long as you have a telrad and can see Alpha Sex and Beta Sex.  Imagine a line between the two.  Place your outermost Telrad ring tangent to that line’s mid-point, on the side towards Leo.   Taking that tangent as 6 o’clock, the “A” is along 12 o’clock centered between the two outermost rings.  Recenter the telrad there, and the “A” should be in or near your field of view.

Now what to call it?  Being an Asterism, we can call it anything we want, because no one officiates over them.  For Gulf Coast dwellers, it might conjure up images of early oil derricks.  Spindletop is a nice homage to that era.  For Amature Astronomers who know Larry Mitchell, Mitchell’s Ladder is a fun moniker.  But for the global community of Amature Astronomers, something more universal is needed.  Kids may prefer to see it as the sorting hat from the Harry Potter series, but there’s no denying that “A” is for Asterism.

Both simulation figures were developed with the use of Skytools3 software.