This year we are offering the option to order t-shirts online! It’s strictly first come, first serve and we have limited quantities so if we sell out, your money will be refunded. Pickup is either at the All Clubs Meeting held at the Mendenhall Community Center or at Astronomy Day held at the Insperity Observatory.

Note: Your PayPal or debit or credit card will not be charged yet.

Your shirts will be waiting for you at the All Clubs Meeting Friday October 4, 2019 or at the Insperity Observatory Saturday, October 5, for Astronomy Day. 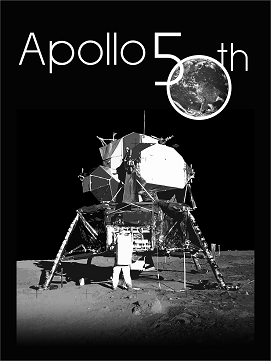 Astronomy Day Weekend 2019 is Friday and Saturday Oct 4-5 and this year the A-Day committee is offering the option of ordering t-shirts online.

Pickup is either at the All Clubs Meeting held this year at the Trini Mendenhall Community Center or at Astronomy Day held at the Insperity Observatory. T-shirt sales will also be available at A-Day, but not at All Clubs.

To order yours follow the procedure here: https://www.astronomyhouston.org/content/online-process-ordering-2019-day-t-shirts Sales are first come, first served. If we run out, we will return your money.

Never been to the Insperity Observatory? Check out this vid in which Aaron Clevenson gives the local Fox station a tour: https://www.fox26houston.com/news/250629787-video

Find out all about ADay at astronomyday.net 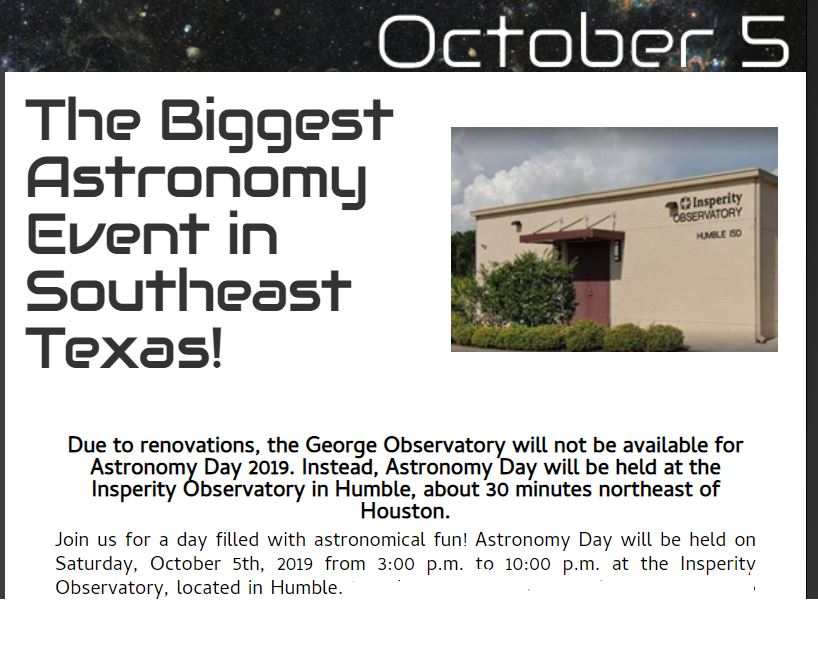 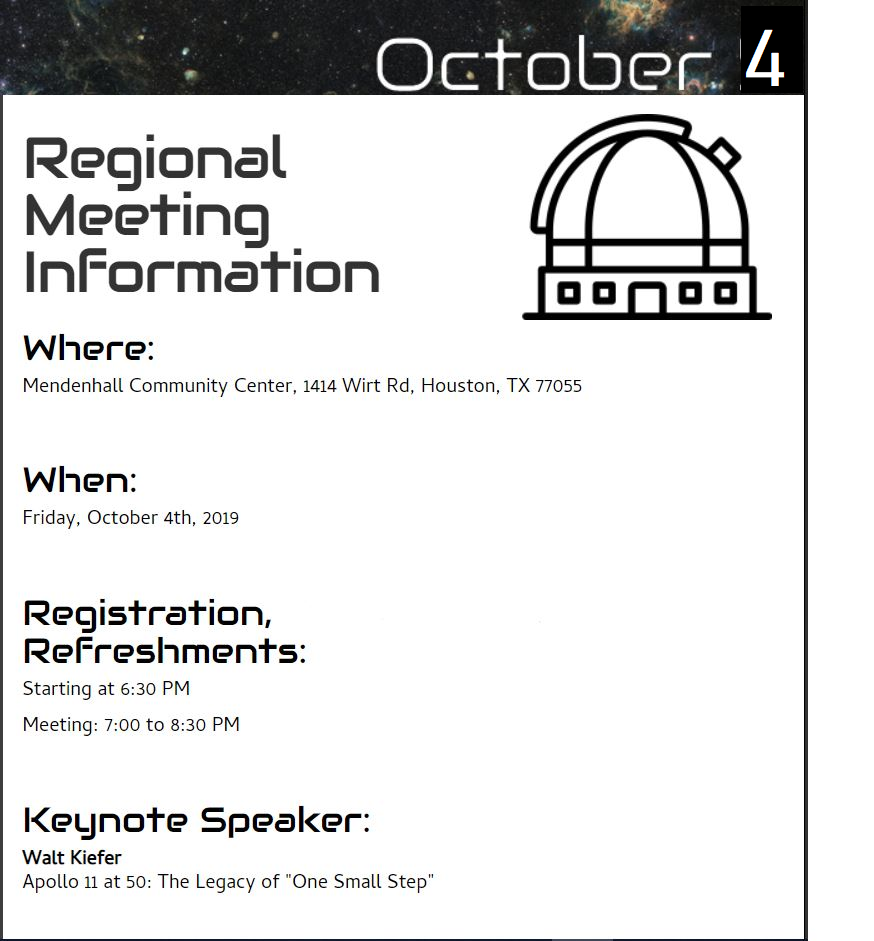 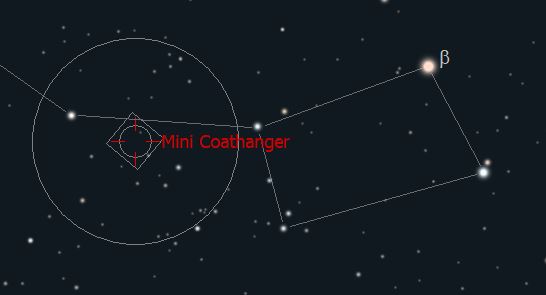 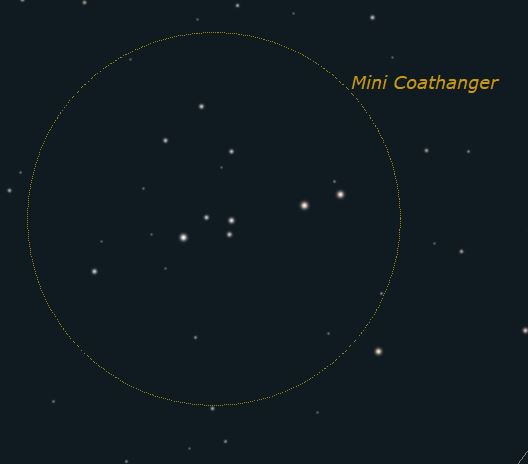 In this medium power eyepiece you can definitely see how the “mini” coat hanger resembles the “major” coat hanger.

Doing a Google search for “Mini Coat Hanger”, the first in the list points to our own Guidestar article from May, 2017, written by the Guidestar Editor, Bill Pellerin. The link is: https://www.astronomyhouston.org/newsletters/guidestar/shallow-sky-object-month-mini-coathanger 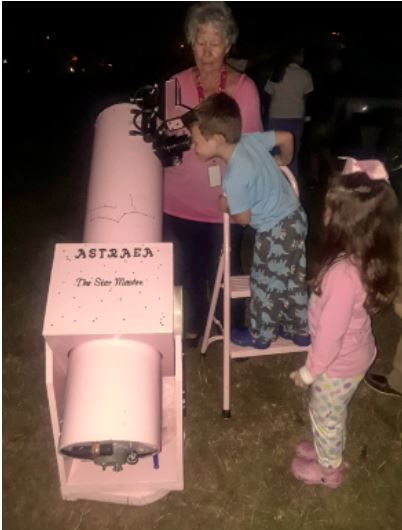 The Houston Astronomical Society held another outreach event at the Westbury Community Garden in southwest Houston on September 10, 2019. This is the second event held at the location. The skies were iffy around sunset with clouds and lightning far to the north. Luckily, the objects for the night: Moon, Jupiter and Saturn were in the southeast, opposite from the storms. Because of the possibility of rain, the attendance was not as expected. Still, we had about 75 people show up. Most telescopes were aimed at those three main objects. However, one 8” telescope went for other objects like the Ring - M57, Hercules cluster - M13, and double star - Albireo. Through Amelia’s “pink” telescope, we had 82 different views.

We had eight telescopes with 11 volunteers. We would like to thank those that brought their telescopes to the event: Dan and Rebe Roy, Jim King, Leah Hall, Debbie Moran, Ed Fraini with wife Anita and daughter Karla, and Lauren Herrington. 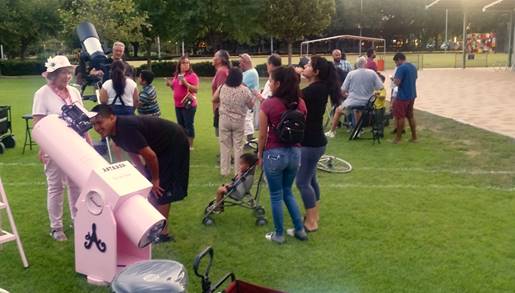 Last night was our monthly outreach event at Discovery Green. The park was packed, as usual on a Saturday night. When we arrived around 7:15, Jim King and Jim McLarty were already set up.  Jim McLarty had used his go-to to find Jupiter so I started with views of the moon.  Once Saturn popped out, I switched to it.  We all had long lines at our telescopes until well after 10:00. We finally took down around 10:45. The picture below was taken right after we set up and doesn’t show the long lines. We counted 485 people looked through my telescope.

There were 3 HAS first timers to outreach there, Andres Salaverria and his wife.  Sorry, we didn’t get the other new member’s name. There were also 5 non-HAS people there with telescopes. Three were potential club members. One of them had already attended one of our meetings.

Thanks Jim & Jim for helping out.